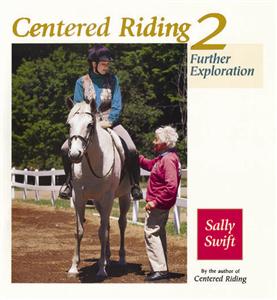 Centered Riding is not a style of riding as are dressage, hunter seat, or Western. Rather, it is a way of reeducating a rider’s mind and body to achieve greater balance in order to better communicate with the horse. Founder Sally Swift revolutionized riding by showing that good use of the human body makes a world of difference on horseback. Early in her work, she established what she calls the “Four Basics”—centering, breathing, soft eyes, and building blocks—which, together with grounding, are the main tenets of her method. When a rider learns and maintains these basics, then harmony between horse and human is possible.

Sally Swift’s first book, Centered Riding, came on the scene in 1985. Now translated into 15 languages, it is one of the bestselling horse books of all time and continues to be just as valid as when it first came out, containing all the fundamentals of Sally’s teaching. Sally’s second book Centered Riding 2: Further Exploration doesn’t replace the first one—it complements it. Over the years, Centered Riding continued to evolve, and Sally inevitably developed many new concepts and fresh imagery, all of which are presented in these pages.

In addition to these additional riding techniques, Sally also concentrates more on the horse than she did in her first book, and she explains in great detail how through the use of Centered Riding you can improve your horse’s musculature and way of going—and consequently, his comfort and performance. This is the intent of Centered Riding—a successful horse and rider partnership, in which they work efficiently together in joyful harmony.

Book Title: Centered Riding 2
Author: Sally Swift
Publisher: J.A.Allen
Format: Hardcover
Number of Pages: 208
ISBN: 9780851318738
Author Notes: At the age of 62, Sally Swift retired from her job as an administrator and returned to her passion for teaching riding. The word soon spread far and wide about Sally’s methods of building awareness of the body-mind connection and understanding its importance to the mechanics of riding well. Her first book Centered Riding was published in 1985 (it is now one of the bestselling horse books of all time). Sally began to travel both nationally and internationally, teaching her methods, and soon founded the organization Centered Riding® Inc, which she worked tirelessly to share with others until her death at the age of 95 in 2009.

Recognized for her influence in riding, Sally Swift received the Lifetime Achievement Award from the American Riding Instructor Certification program in 1997, and in 2006, Sally was inducted into the United States Dressage Foundation’s Hall of Fame, an honor reserved for those persons who have had a major impact on horseback riding. In June of 2008, she was presented with the seventh annual Equine Industry Vision Award by Pfizer Animal Health and American Horse Publications, an award that recognizes innovation, ingenuity, and service across the entire equine market. In January of 2010, Sally Swift was posthumously awarded the United States Equestrian Federation Pegasus Award, which recognizes an individual who has made an out - standing contribution to equestrian sport.
Availability: In Stock
Condition: New