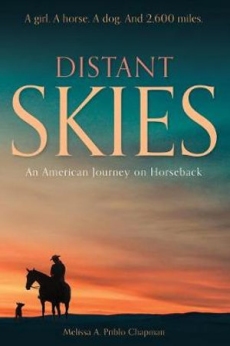 Book Title: Distant Skies
Author: Melissa Chapman
Publisher: Trafalgar Square Books
Format: Paperback
Number of Pages: 376
ISBN: 9781570769603
Author Notes: Melissa A. Priblo Chapman is a freelance writer who has had work published in magazines including The Western Horse, Good Dog!, and Doggone. Her story “Gypsy, Cross-Country Dog” appears in the book Traveler’s Tales: A Dog’s World alongside the work of such renowned authors as John Steinbeck and Gary Paulson. Chapman has been a paid speaker to over 100 organizations in regard to her solo cross-country trip and is a member of the Long Riders Guild, a worldwide league of equestrian adventurers. Chapman is a married mother of four and lives in Upstate New York. She rides every day and continues to share life with her horses and dogs.
Further Title Description: An American Journey on Horseback
Condition: New