Still Horse Crazy After All These Years 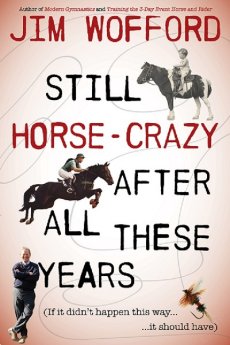 Three-time Olympian Jim Wofford grew up with horses, beginning with his childhood on a Kansas farm in the forties. The son of an Olympic show jumper, Wofford and his siblings all found themselves pursuing a “riding life”—one of reward and growth, of challenge and disappointment, but mostly of learning to understand and work with a complex animal as an athletic partner and friend. Over the years Wofford developed as an international competitor, successful coach, and sought-after commentator. Known for his wit, irreverence, and whip-smart observations on the sport and its participants, as well as the state of the “outside” world, his magazine columns were as legendary as his performances in the saddle. Now Wofford brings his immense talent for telling tales—all of them (mostly) true—to the page in this incredibly entertaining book. With lessons in horsemanship both simple and profound interweaved with fascinating stories from his many diverse adventures around the world, readers enjoy a rare insider’s look at the life of a professional sportsman as he tries to reconcile that which drives him with livelihood, family, and aging. The greater questions of equestrianism, such as how to make decisions for the good of the horse and how to find a soulful connection with him, are themes throughout. While they may never be fully answered, we all discover something about ourselves as we see how they contribute to Wofford’s own evolution over time.

Book Title: Still Horse Crazy After All These Years
Publisher: Trafalgar Square Books
Format: Paperback
Number of Pages: 312
ISBN: 9781570769559
Author: Jim Wofford
Author Notes: Jim Wofford is a three-time Olympian and one of the best-known eventing trainers in the world today. In 2000, Wofford was listed by the Chronicle of the Horse as one of the “50 Most Influential Horseman of the 20th Century,” and he is a Hall of Fame inductee of both the United States Eventing Association and Culver Military Academy, which he attended. Wofford is the author of Training the 3-Day Event Horse and Rider; Gymnastics: Systematic Training for Jumping Horses; Modern Gymnastics, Take a Good Look Around; 101 Eventing Tips; and Cross-Country with Jim Wofford. He trains at his farm in Upperville, Virginia, and travels extensively, teaching and giving clinics (jimwofford.blogspot.com).