Quest For A Classic Winner 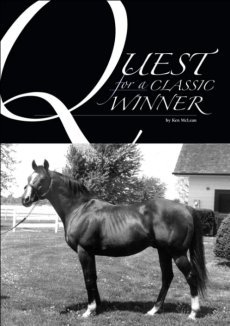 Ken McLean is one of the world’s leading authorities on thoroughbred pedigrees. He was recruited by Overbrook Farm to oversee the establishment of its foundation sire Storm Cat, his efforts resulting in that stallion’s rise to become Champion USA sire.

Storm Cat has subsequently become an influential breedshaper with his descendants Shamardal and Into Mischief among his flagberers.

Quest For A Classic Winner is arguably the most influential book written about thoroughbred breeding, the “Elite Family Charts” are a masterpiece of research and well worth the price of the book alone.

There are insightful chapters on Marcel Boussac, The Agha Khan and his Dosage Formula, Heredity and the Genetic Code, Stallion Selection- Considerations in the planning of matings, Olin Gentry -Blue Larkspur and La Troienne and much much more.

This 300 page reference will be produced in a strictly limited print run of 500 copies, so please order in advance to avoid disappointment. The sold out earlier editions are selling online for multiples of this one which is faithful to the original and contains the vital index which was added to the second edition.