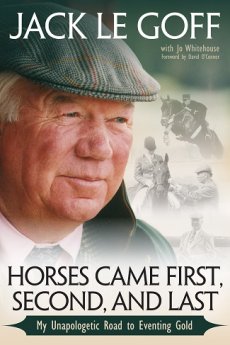 In the 1970s, a French coach was commissioned to lead the United States Eventing Team, then in its infancy. Jack Le Goff arrived knowing little English but much horsemanship, and it wasn't long before his intensive, innovative methods built the foundation of a team that would dominate the sport for much of his 14-year tenure. With an astounding eighteen medals in eight international championships and team gold medals at the Olympic Games in 1976 and 1984, Le Goff created the standard by which modern-day teams are measured. But Le Goff's techniques could be unforgiving—tough, brutal, and abrasive—earning him critics as well as converts.

In this, his autobiography, Jack Le Goff tells the whole story, from impoverished beginnings in Morocco to the tragic death of his father; from his successes as a competitive equestrian to the partying and womanizing that threatened to derail his career before it even began. We come away with a behind-the-scenes look at the inner workings of high-level international equestrian sport. We meet the elite riders and horses of past decades, seeing up-close-and-personal how they achieved their successes, faced their failings, and in the end rode for glory under of one of the world's greatest coaches.

Book Title: Horses Came First, Second and Last
Author: Jack Le Goff
Publisher: Trafalgar Square
Format: Paperback
Number of Pages: 288
ISBN: 9781570768279
Author Notes: Born in 1931, Le Goff's father was a French cavalry officer. Jack began riding early, and during his teenage years competed as a steeplechase jockey, as well as showing in dressage, showjumping, and eventing. At the age of seventeen, after the death of his father, Le Goff joined the French military and began riding for Cadre Noir, the national riding academy. After his training, he became a riding master at the school. He remained in this position for a decade. As a French soldier he fought in the Algerian War after his appearance in the 1960 Olympic Games. Le Goff competed in two Olympic Games, in 1960 and 1964. In 1960, at the Roma Games, he finished sixth individually and helped the French team to a bronze medal. At the 1964 Summer Olympics in Tokyo, he finished twenty-third individually, while the French team came in eighth. He was also the French national eventing champion in 1956 and 1964. In the US he had a long-time companion named Susan Smith, and at his death was survived by her, as well as five children, five grandchildren and three great-grandchildren.