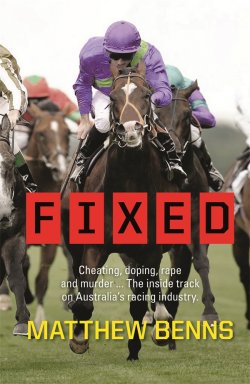 New Edition for 2013- revised and updated

Dapper horse trainer Les Samba was in Melbourne for the annual yearling sales when he turned down an Italian meal with racing contacts saying, ‘I have to meet a bloke.’ Just hours later he was dead, blood pouring out of five bullet wounds to his head and body.

Racing in Australia has a dark and dangerous underbelly. Powerful people play for high stakes in an industry worth $14 billion a year. And they don’t play nicely.

Yearling sales are rigged, horses doped, races fixed and taxes dodged by high-rolling punters. Every day huge sums of money are made by bookies who don’t want to put any of it back into the industry. Meanwhile, jockeys starve themselves to the point of delirium - many suffering permanent injury while racing for as little as $130 a race. Young female jockeys are raped. Horses suffer terribly too - every year almost half of Australia’s racehorses are sent to abattoirs to fuel the booming pet-food industry.

This is the true story every racing fan needs to read. It goes past the glorious image of Black Caviar winning off twenty-two starts to reveal what really goes on in the murky corridors of Australian racing. It tells you about the bent jockeys, cheating trainers, crooked owners and greedy bookies. Everyone wants an angle in racing - this book tells you just how often that means the race is Fixed.

Book Title: Fixed (New Edition)
Format: Paperback
ISBN: 9780857983268
Author: Matthew Benns
Author Notes: Matthew Benns is a freelance journalist and is the author of the bestselling The Men Who Killed Qantas and Dirty Money, published by Random House. He has previously worked as a journalist for numerous British newspapers including the Daily Mail, The Times, the Guardian, Today and the Sun, and also as an investigative journalist for the Australian Sun Herald. He lives in Sydney.
Condition: New
Availability: In Stock