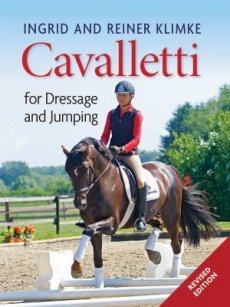 Every horse, no matter in what discipline it is ridden, will benefit from working with cavalletti. For Olympic champion Ingrid Klimke, riding over cavalletti is key to success. Cavalletti training improves the horse’s basic gaits, develops rhythm, suppleness and cadence and increases fitness and agility.

This handbook describes how to work with cavalletti on the lunge, provides valuable new schooling ideas and inspiration for dressage work, as well as numerous layouts for gymnastic jumping.

Since its first publication in 1969, Cavalletti has become a standard reference book. This fourth edition had been further revised with new photographs.

Book Title: Cavalletti for Dressage & Jumping (New 4th Ed)
Author: Ingrid and Reiner Klimke
Publisher: J A Allen
Format: Hardcover
Number of Pages: 156
ISBN: 9781908809759
Author Notes: Ingrid Klimke follows in the footsteps of her famous father, the late Dr Reiner Klimke. An Olympic and European gold medallist, she is one of very few riders to have achieved major successes at the highest level in both dressage and three-day eventing. She lives near Munster, Germany.

The late Dr Reiner Klimke was the most successful dressage rider in the world; his achievements included included Olympic gold medalist, World Dressage Champion, European Dressage Champion and European Horse Trials Champion. All his victories and medals were won on horses he had trained himself.