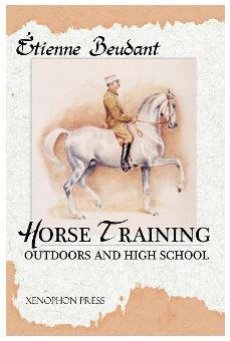 “My principle of dressage is to have the horse equally light to the spur and the hand and which does not allow the displacement of the rider’s seat as an aid, and leaves the horse to move on his own once he has been given the correct position by the rider” for if we "Let the horse believe that he is our master, then he is our slave. Therein lays my opinion: the equestrian truth."  -ÉtienneBeudant (1863-1949)

For dressage enthusiasts who believe that there is no incompatibility between sport riding and academic riding,this is a veritable"Bible." Its author’s Étienne Beudant(1863-1949) writings belong to the golden legend of theFrench riding. Gifted disciple of the illustrious Faverot deKerbrech (himself a student of Baucher) Beudant won the admiration of his contemporaries. General Decarpentrycalled him "a whopping squire." Others called him the"Mozartof riding."

Horse Training: Outdoors and High School includes general principles of dressage and even the philosophy ofdressage) and some technical considerations that are good to consider long before making implementation. Finally, Beudant recounts important memories of horses (often very difficult ones) that he had trained or correctedor simply occasionally mounted. An important theme runs through the book and explains its title: the full compatibility or continuity between the correct work of an ordinary saddle horse and that of high school horse.

Horse Training: Outdoors and High School provides an important historical bridge between Faverot de Kerbrech of the 19th century and the later writers of the 20thcentury, Nuno Oliveira and Albert Decarpentry.