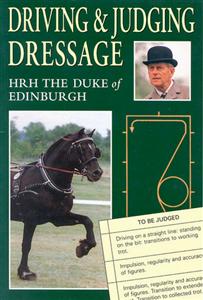 Price: AUD $17.99
RRP: AUD $23.95
The object of this invaluable book is to discuss and explain the meaning of the FEI rules for driven dressage and to solve the problems facing both drivers and judges in meeting the requirements purposes and intentions of dressage as a driven discipline.
Book Title: Driving and Judging Dressage
Publisher: J.A.Allen
Format: Paperback
Number of Pages: 64
ISBN: 9780851316666
Author: HRH The Duke of Edinburgh KG KT
Author Notes: The Second World War came at an awkward moment for the Duke of Edinburgh. He joined the Royal Navy in 1939 when he was 18, and as he spent five of the next six years at sea, he had little time for sports of any kind. It was only after the war when he was serving in a destroyer based in Malta in 1949 that he was persuaded to take up polo by his uncle, Lord Mountbatten, who was also stationed at Malta at the time and busy reviving Naval polo. His father-in-law, the late King George VI died in 1952 and the commitments of his new position allowed little time for any other sporting activities other than weekend polo and occasional charity cricket matches. In 1970, after 20 years of playing polo, he decided it was time to give up. In 1964 he had been elected President of the FEI (International Equestrian Federation) in succession to Prince Bernhard of the Netherlands, and it was in this capapcity that he became involved in the drafting of rules for international carriage competitions, which were introduced in 1969. He was not among the very first competitors in this new sport, but he was instrumental in getting the first international carriage driving competition organised at the Windsor Horse Show in 1971 and it has been an annual event evcer since. As President of the FEI, he attended the first European Championships in Hungary in 1971 and the first World Championships in Germany in 1972. In 1973 he decided to take up four-in-hand driving himself in place of polo, and fate decreed that the second driving competition of his life was to be the second European Four-in-Hand Driving Championships at Windsor in that same year. He was sixth in dressage, retired with a bent axle in the last hazard of the marathon, but completed one of the only 3 clear rounds of the obstacles to finish second in that phase, although his overall place was seventeenth out of nineteen. Fate also decreed that he should compete for the last time with a team of horses at the Wrold Championships at Ascot in 1986. He was consistently successful in dressage and the obstacles, but never quite equalled the same standard in the marathon. He won his first events at Goodwood against small fields in 1976 and 1977, but had to wait till 1981 to register convincing wins at Norwich and Tatton Park. In 1982 he was first in dressage in six out of six national competitions and was the overall winner at Windsor. In the same year he achieved fourth place in the dressage in the World Championships in Holland, where he finished in sixth place overall out of 39 entries. He represented Britain at three European Championships and at six World Championships. He is now driving a team of partly home-bred Fell ponies, which are otherwise used for stalking at Balmoral.
Condition: New
Availability: In Stock