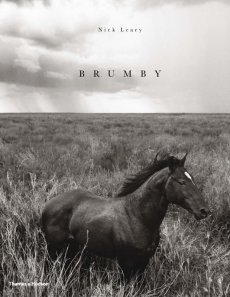 This spectacular book features the photography of Nick Leary, who was introduced to the art form while working with some of the world's best photographers during his earlier career as an international model. Then working for some years as a celebrated fashion photographer, Nick Leary now uses his photographic art to Celebrate Australia and bring this celebration to the wider world. This book features iconic Australian brumbies that roam the outback.

He says: There is a feeling about this country that excites me, it's a feeling of freedom and rawness. I chose to photograph Australia's wild horses as to me the brumby epitomises this feeling and through these images I can share both the beauty and the spirit of Australia with the world. As reported in The Australian recently: Heads up, tails high, bucking, steam billowing from their nostrils, they fly at full gallop across the tussock grass, sleek and glossy.

Book Title: Brumby
Author: Nick Leary
Publisher: Thames & Hudson
Format: Hardcover
Number of Pages: 193
ISBN: 9780500500613
Author Notes: Nick Leary's career as a photographer began in New York in 2000. He travelled the world shooting for fashion titles such as Vogue, and his clientele included Calvin Klein, Giorgio Armani, Cate Blanchett, Hugh Jackman and Miranda Kerr. Today he works out of his home-town Sydney and his base in Los Angeles. In 2005 he visited Titjikala, a remote Indigenous community near Alice Springs, where he was introduced to stories of the Dreamtime by Aboriginal elders, and later exhibited his photographs from his experience at Sotheby's in Sydney. Since then, he has exhibited works as part of his ongoing Celebrate Australia project shown in Sydney, the Gold Coast, New York and Los Angeles, and exhibitions are planned for London and Germany later in 2015. These exhibitions feature the wild brumby photographs.
Availability: In Stock
Condition: New