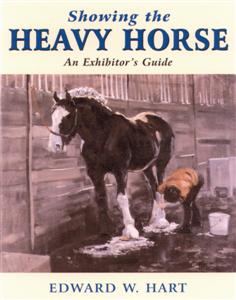 Price: AUD $55.00
RRP: AUD $79.95
A comprehensive guide to the conditioning producing training and exhibition of the heavy horse breeds. The author gives advice on general care handling feeding shoeing plaiting and preparation for the show ring. Harness handlers carts and carriages are examined and the problems of transporting these gentle giants and their vehicles are also covered.
Book Title: Showing the Heavy Horse - An Exhibitor's Guide
Author: Edward W. Hart
Publisher: J.A.Allen
Format: Hardcover
Number of Pages: 352
ISBN: 9780851318271
Author Notes: Edward Hart is an all-round countryman who has an abiding interest in horses, and particularly in the working animals amongst which he grew up. He learnt to plough with them during his farm-worker days, and considers himself lucky to have known so many men steeped in horse lore. His interest in showing developed during the heavy horse revival in the 1970s, after their near-extinction during the 1960s. He became the first co-editor of Heavy Horse and Driving in 1976, and then took over as heavy horse correspondent for Horse and Hound. He has written for Heavy Horse World since its inception in 1987. He regularly attends the major shows, meeting the top practitioners of driving, preparation and presentation, and general heavy horse management. Advice and information gleaned from many such people is included in these pages. A keen advocate of protecting the environment, he makes the point that horses are 'environmentally friendly', and that the showing of these noble animals is a constant inspiration to their wider use.
Availability: In Stock
Condition: New