Home > Horse Sports And Activities > Over the Hurdles: The History of Jumping Racing in Australia

Over the Hurdles: The History of Jumping Racing in Australia 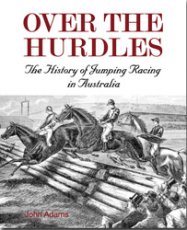 No Australian sport has had a more interesting or colourful history than jumping racing. John Adamsâ€™s Over the Hurdles tells the remarkable story of jumping in Australia, from the first Sydney

steeplechase in 1832 to the sportâ€™s controversial battle for survival in recent years. In this first-ever history of jumping racing in Australia, Adams leads us on a beguiling tour of the horses, jockeys, racecourses, characters, and controversies of the past 180 years. The book recounts how professional jockeys came to replace amateur â€˜gentlemenâ€™ riders; how the sport boomed in its heyday, when Melbourne alone held 120 races a year; how the infamous criminal Squizzy Taylor

tried to poison the 1924 Grand National favourite; how famed poet, Adam Lindsay Gordon rode a record three winners over the hurdles in one day; how a desperate crowd once killed a dishonest bookmaker at Flemington; how the sport strengthened ties between Australia and Ireland, the spiritual home of jumping; and how the falls, injuries, and deaths threatened its survival. The book captures the thrilling, courageous spirit of jumps racing. Riders, whether successful or not, universally state that there is no feeling like competing in a jumping race, whether they win or run last. But at the heart of Adamsâ€™s history lie the deeds of magnificent horses that carried their jockeys to victory time and time again despite being burdened by large weights.. Redleap, Mosstrooper, Mountain God, Winterset, and Crisp earned mythical status in their eras, and Over the Hurdles ensures their achievements will never be forgotten. The Australian horses, jockeys

and trainers have international reputations, but deserve wider appreciation in Australia. Over the Hurdles is a significant contribution to jumping racing, and to Australian sport as a whole.

Here's a fantastic montage of images taken from Australian jumping racing history.  Also this video was produced to raise awareness for a petition to save jumping racing in South Australia and Victoria.  To sign the petition click here.

Book Title: Over the Hurdles: The History of Jumping Racing in Australia
Author: John Adams
Publisher: Melbourne Books
Format: Paperback
Number of Pages: 304
ISBN: 9781877096327
Author Notes: John Adams served for 28 years as the Executive Officer of the Australian Jumping Racing Association from itsâ€™ foundation in 1978, through to 2006. He was also the Secretary of the Australian Trainers Association (Victorian Branch) from 1979 to 1987. Under his administration, jumping racing rose from the ashes to become, once again, a vibrant force in the racing industry. He has a deep appreciation for the rich history of jumping racing in Australia and was diligent in collecting and ecording stories that form the basis of this book. He maintains a strong interest in jumping racing and is a columnist with Winning Post.
Availability: In Stock
Condition: New