Home > Psychology For Horse And Rider > Two Brains, One Aim: A Riding Coach’s Key Concepts for Bringing Horse and Rider Together (and Ending in Success!)

Two Brains, One Aim: A Riding Coach’s Key Concepts for Bringing Horse and Rider Together (and Ending in Success!) 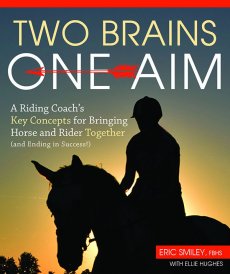 Riding well can be a puzzle. This book puts together the pieces, including:
- How humans and horses learn.
- Striving for partnership vs. dictatorship.
- Early training and developing skills.
- Demystifying equestrian-speak.
- Dressage outside the arena.
- Ground poles for the rest of us.
- Jumping and cross-country tips.
- Solving problems, wherever you ride.
- Competition psychology.
- Being coached and being a coach.

“This book is aimed at riders, coaches, and anyone interested in learning more about how humans and horses interact. I have tried to harness my own experiences when I cover the three main disciplines—dressage, show jumping, and eventing—and how they relate to one another. I look at how those in a coaching position can guide riders to perform better by making their lives less complicated and more fulfilling, and I examine how riders can apply the same principles to training their horses and become self-sufficient.” —Eric Smiley

Book Title: Two Brains, One Aim: A Riding Coach’s Key Concepts for Bringing Horse and Rider Together (and Ending in Success!)
Publisher: Trafalgar Square
Format: Paperback
Number of Pages: 192
ISBN: 9781570768927
Author: Eric Smiley with Ellie Hughes
Author Notes: Eric Smiley is a former international event rider who represented Ireland at European, World, and Olympic level, winning team bronze medals on two occasions. Smiley began his equestrian career in the Pony Club and continued it in the army and then the world-renowned Talland Equestrian Center, during which time he gained his British Horse Society Instructor's certificate. In 1995 Smiley passed his British Horse Society Fellowship exam, the highest teaching qualification in the industry. He was Team Coach to the Belgian Eventing team for the 2011 European Eventing Championships and 2012 London Olympics and is an FEI judge who regularly acts as a Ground Jury member. Smiley is the author of the cross-country bible Look… No Hands! and travels the globe helping professional and amateur riders achieve their goals.