Home > Riding And Training > Horsemanship: Comprehensive Book on Training the Horse & Its Rider

Horsemanship: Comprehensive Book on Training the Horse & Its Rider 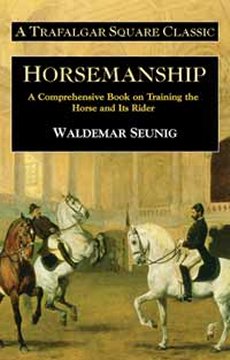 The latest addition to the Trafalgar Square Classics collection, Horsemanship remains one of the most comprehensive and enduring books ever written on the training of horse and rider, from the basics to haute école.

Book Title: Horsemanship: Comprehensive Book on Training the Horse & Its Rider
Publisher: Trafalgar Square
Format: Hardcover
Number of Pages: 388
ISBN: 9781570762390
Author: Waldemar Seunig
Author Notes: Waldamar Seunig enjoyed a long and influential career as a noted rider, judge of international competition, and a writer of short stories and literary studies. Educated at the Australian military academy, he subsequently attended the famous French Cavalry School at Saumur- the Cadre Noir- and the celebrated Spanish Riding School in Vienna. From 1922 until 1930 Colonel Seunig was Master of the Horse at the Court of Alexander of Yugoslavia, and in 1930 became Chief Riding Master of the Yugoslavian Cavalry School. He also served as coach to the German Olympic Team, and was head of riding and driving instruction for the German Army during World War II.