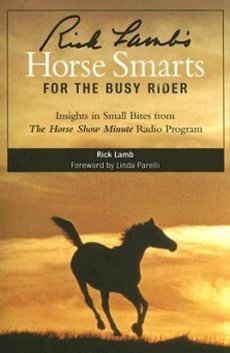 Price: AUD $23.95
RRP: AUD $29.95
The Horse Show Minute is a widely syndicated weekday radio feature popular with horse lovers of all stripes. Creator Rick Lamb now brings together more than 200 of his best one-minute scripts in Rick Lamb's Horse Smarts for the Busy Rider. Each combines the expertise of a leading authority with Lamb's crisp commentary. Topics range from riding and training to stable management veterinary matters breeds disciplines and more. For example:
"Petting Horse"
"Horses enjoy the loving touch of a human being but there's a right way and a wrong way to pet your horse."
"Horses are basically suspicious creatures at heart and if we act unsure or tentative when we touch them they're liable to think something's wrong. Veteran horseman Kenny Harlow explains how he pets a horse."
"I just go up and pet him. If you go and cup your hand and turn it down and do all that stuff and go nice and slow and let him sniff at you and all the horse is going to think you're somewhat scared to start with. If you just walk up and pet him like he's a dead broke quiet horse then that's what he's going to act like it. If you act like he's dangerous he's going to act dangerous."
"Horses are not big dogs. They don't like to be patted or slapped even though most will tolerate a certain amount of that. The best way to pet a horse is to stroke rub or gently scratch him and until you get to know him it's best to first pet him on his neck."

Informative stimulating and often controversial Rick Lamb's Horse Smarts for the Busy Rider provides insights in small bites that can be enjoyed by anyone interested in horses.
Book Title: Rick Lamb's Horse Smarts for the Busy Rider
Publisher: Globe Pequot Press
Format: Paperback
ISBN: 9781592288076
Author: Rick Lamb
Author Notes: Rick Lamb was born and raised in Wichita, Kansas. He had a passionate interest in horses from an early age but few opportunities to be around them. Instead, he focused on music, turning pro at the age of 14 and fostering talents that he would repeatedly call upon in the coming decades. By 2003, Rick had racked up six industry awards for his radio shows, had started emceeing live events, and was appearing occasionally on television and video. That year he also landed a contract for his first book, a joint project with Dr. Robert M. Miller titled The Revolution in Horsemanship. As the year came to a close, Rick began playing music again, this time with veteran singer/guitarist Jay Casmirri. Today The Blenderz play publicly whenever their busy schedules allow. 2005 brought three more industry awards for The Horse Show and Rick's second book, Horse Smarts for the Busy Rider. 2006 ushered in a new era with Rick's move to television on RFD-TV. Rick's third book, Human to Horseman: a Journey of Discovery, Growth, and Celebration, was released in September of 2008. At this time, Rick and Diana also sold Lambchops to longtime employees, Susan Bolin and Jim Sherry. A confessed workaholic, Rick enjoys nothing more than being immersed in multiple creative projects. He and Diana live in Phoenix with their two horses, Candy and Fidla, and their black cat, Angus. They have three grown children, sons Ryan and Todd, and daughter, Blair.
Condition: New
Availability: In Stock