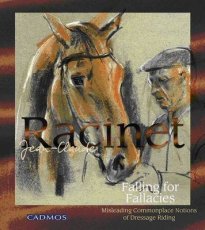 Price: AUD $29.95
RRP: AUD $69.95
Book Title: Falling for Fallacies: Misleading Commonplace Notions of Dressage Riding
Publisher: CADMOS
Format: Hardcover
Number of Pages: 240
ISBN: 9783861279693
Author: Jean-Claude Racinet
Author Notes: Jean-Claude Racinet, born in 1929, is renown world-wide as one of the most esteemed trainers of the French tradition of the Legerete. His basic and advanced training took place, amongst other schools of equitation, at the School of Cavalry in Saumur. In later years, he became a free-lance professional trainer and rider and emigrated to the United States in the 1980's, where he has lived since. He is well-known as the author of a number of books on riding based on Legerete and has also written several articles on the classical form of equitation for a number of renowned equestrian magazines. Christian Kristen von Stetten earned himself a name as a translator and editor of many books on Legerete and on classical dressage, as well as contributing articles in many international magazines. Having lived in Canada for many years, he is internationally respected as a trainer, and is regularly running clinics in the USA and Germany.
Condition: New
Availability: In Stock