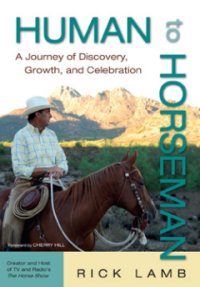 Price: AUD $22.95
RRP: AUD $29.95
Rick Lamb, creator and host of the popular TV and radio shows The Horse Show and The Horse Show Minute has spent the past decade bringing horsemen and women of all ages and levels of experience the most current information available on the care, riding, and training of horses. Along the way, he's personally tested everything he's learned, transforming himself from greenhorn to well-rounded horseman. Now, in a soul-baring collection of personal stories and practical lessons, Lamb shares the very best of what he's come to know, and the very worst mistakes he's made. He passes along his hard-won wisdom, offering useful advice on various aspects of horsekeeping and horsemanship, as well as an exclusive look at four years of "The Road to the Horse colt-starting competition."
Book Title: Human to Horseman
Publisher: Trafalgar Square
Format: Hardcover
ISBN: 9781570763946
Author: Rick Lamb
Author Notes: Rick Lamb was born and raised in Wichita, Kansas. He had a passionate interest in horses from an early age but few opportunities to be around them. Instead, he focused on music, turning pro at the age of 14 and fostering talents that he would repeatedly call upon in the coming decades. By 2003, Rick had racked up six industry awards for his radio shows, had started emceeing live events, and was appearing occasionally on television and video. That year he also landed a contract for his first book, a joint project with Dr. Robert M. Miller titled The Revolution in Horsemanship. As the year came to a close, Rick began playing music again, this time with veteran singer/guitarist Jay Casmirri. Today The Blenderz play publicly whenever their busy schedules allow. 2005 brought three more industry awards for The Horse Show and Rick's second book, Horse Smarts for the Busy Rider. 2006 ushered in a new era with Rick's move to television on RFD-TV. Rick's third book, Human to Horseman: a Journey of Discovery, Growth, and Celebration, was released in September of 2008. At this time, Rick and Diana also sold Lambchops to longtime employees, Susan Bolin and Jim Sherry. A confessed workaholic, Rick enjoys nothing more than being immersed in multiple creative projects. He and Diana live in Phoenix with their two horses, Candy and Fidla, and their black cat, Angus. They have three grown children, sons Ryan and Todd, and daughter, Blair.
Condition: New
Availability: In Stock