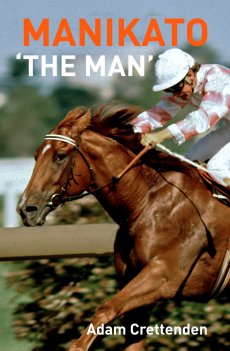 A champion racehorse, Manikato won races at the elite level over six seasons through the late 1970s and early 1980s and became the first Australian sprinter to earn $1 million in prize money.

But once getting to the top echelon of racing as a two-year-old, his life endured twists and turns that continually threatened to derail his career, and his life. From the sudden death of his original trainer Bon Hoysted shortly after the 1978 Golden Slipper Stakes, to the prolonged illnesses and niggling injuries that kept Manikato's name in the headlines, the fact he could compete let alone win was almost miraculous.

Year after year, Manikato was guided patiently by astute trainer, Bob Hoysted - Bon's brother. The powerhouse chestnut with a quirky personality forged historic moments including victory in the William Reid Stakes at Moonee Valley five years in a row; a record unlikely to ever be matched.

In his later years, his grittiness and courage were more evident than his speed in continuing to win races, further endearing him to race crowds.

Just as his life was full of drama, so was his mysterious and tragic death at the age of eight, despite the resilient efforts of those closest to 'The Man'.

Book Title: Manikato 'The Man'
Publisher: Melbourne Books
Format: Paperback
Number of Pages: 256
ISBN: 9781925556940
Author: Adam Crettenden
Author Notes: Adam Crettenden is a racing broadcaster with more than twenty years experience.
He has held his full-time position as a leading voice of Victorian country racing since 1996, calling over 2500 race meetings. He can be heard on a regular basis via Australia's racing radio network as well as Sky Racing, and is also a racecaller and presenter for Racing.com, a free-to-air TV affiliate of Seven West Media. Manikatp is his second book.