Phar Lap: The Story of Australia's Greatest Ever Racehorse 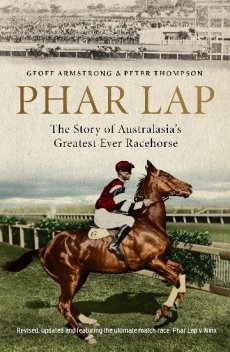 Every champion Australian racehorse since 1930 has been called 'the best since the Phar Lap'. So will the next record breaker, because Phar Lap captured the imagination of the sporting public like no other thoroughbred ever has or ever will. This was in part because of his remarkable backstory, featuring a battling trainer named Harry Telford and a knockabout young strapper, Tommy Woodcock, who built a relationship with Phar Lap that was second to none. It was also because of the mysteries that surrounded the legendary horse. Did gangsters really try to shoot him on the eve of the Melbourne Cup? Who or what killed Phar Lap? This revised and updated edition has all the answers. It explains why the horse cost a pittance as a yearling, was a laughing-stock when it first raced, but became unbeatable. The racing authorities tried to stop him; the desperate punters of the Great Depression loved him. The book also presents a fresh look at the controversies, reaffirming that there were no bullets in the gun and that neither the Americans nor arsenic were responsible for his death. As Winx was winning 33 races straight from 2015 to 2018, everyone kept asking: 'Could she have beaten Phar Lap?' Here, the authors compare the two Immortals from every angle, setting up the ultimate match race.

Book Title: Phar Lap: The Story of Australia's Greatest Ever Racehorse
Publisher: Stoke Hill Press
Format: Paperback
Number of Pages: 304
ISBN: 9780994500892
Author: Geoff Armstrong & Peter Thompson
Author Notes: When Phar Lap was first published in October 2000, Geoff Armstrong and Peter Thompson were credited with writing the definitive biography of the legendary horse. Armstrong is recognised as one of Australia's leading sports publishers and is the author of The 100 Greatest Cricketers and ESPN's Legends of Cricket. In recent years he has worked on Olympic and Commonwealth Games coverage for Channels 7 and 9, SBS-TV's Ashes cricket coverage in 2009, and Channel 7's presentation of the 2017 Rugby League World Cup.