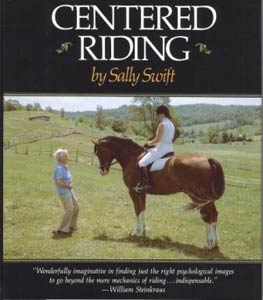 This book's publication 21 years ago caused a revolution in riding by demonstrating how good use of the body can make a world of difference to both rider and horse. The author is widely known for her innovative teaching philosophy stressing body awareness the value of soft eyes and proper breathing centring and balance and her methods enable horse and rider to achieve harmony working together naturally and without pain.

Book Title: Centered Riding
Publisher: J.A.Allen / Trafalgar Square
Format: Hardcover
Number of Pages: 288
ISBN: 9780851319339 / 9780312127343
Author: Sally Swift
Author Notes: Sally taught riding professionally for ten years as a young woman, however moved on and it wasn't until she retired at the age of 62 that she returned to teaching riding. She had an awareness of the body-mind connection and its importance to the mechanics of riding well. The book Centered Riding was published in 1985 and became one of the best-selling horse books of all time. It was followed by two popular videotapes in 1986. Sally began to travel both nationally and internationally to teaching Centered Riding. She formed the organization Centered Riding Inc, and since the organization began 1,000 instructors have been approved. Now aged 85 she no longer travels, but still teaches a few private lessons and some two-day clinics.
Condition: New
Availability: In Stock